An Historic Cemetery in Dallas, Texas 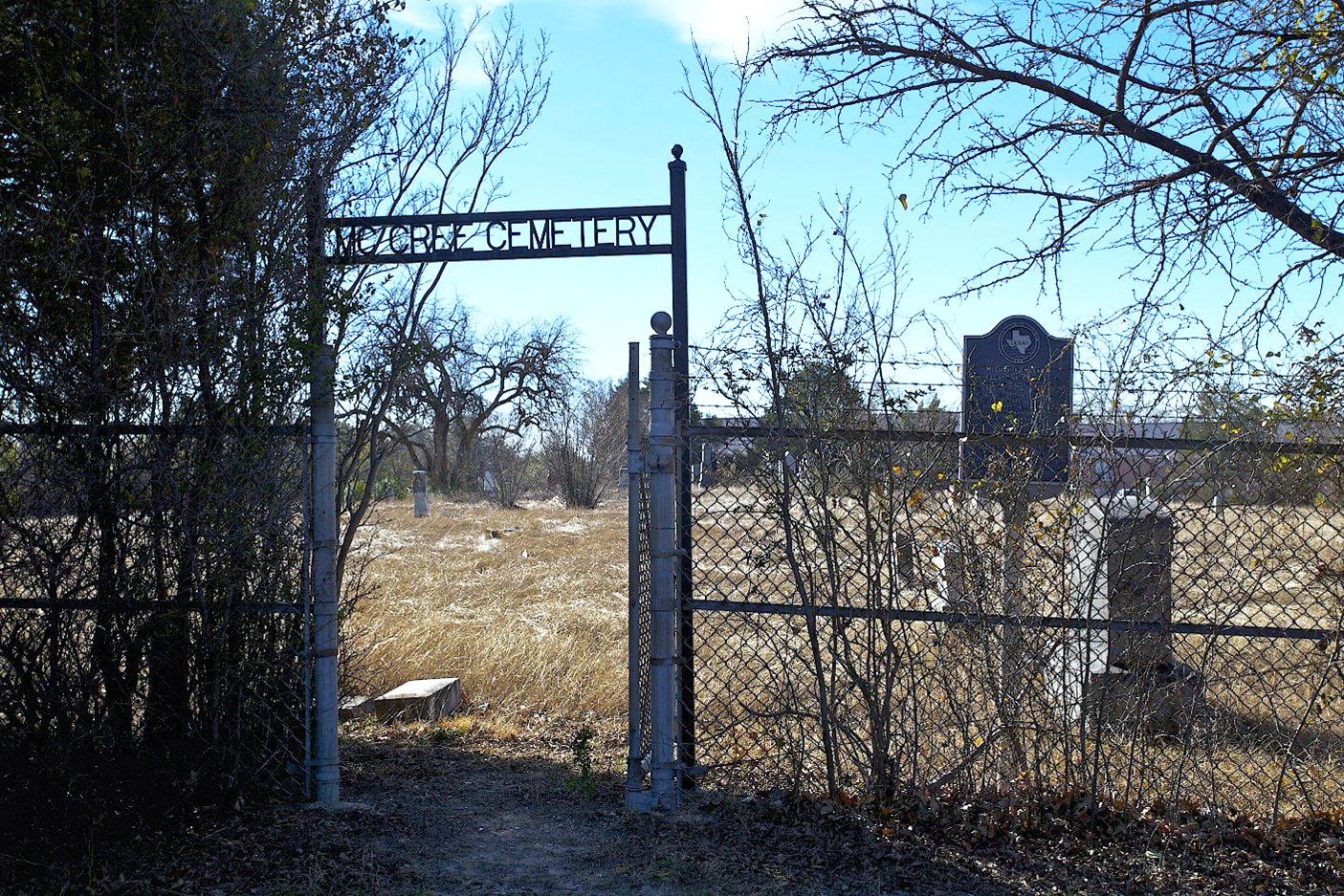 Discovering and preserving the history and legacy of McCree Cemetery

How Can I Help?

DALLAS, Texas – A salute by volley honored veterans of the War of 1812 whose graves were marked in a special ceremony at McCree Cemetery on March 6. As the shots rang out, a crowd in rapt attention reflected on the service of veterans who rested close by. Their legacies have helped shape the city we know today.

“It was a moving ceremony that reflected on what it means to serve, both for your country and — for these veterans — in an area that was new to them and many other settlers of the Dallas area in the 1800s,” noted Robin Moss Norcross, president of the McCree Cemetery Association Board of Directors.

The two veterans being honored in this grave marking ceremony are men who brought their legacies with them to Texas, and were among early settlers in Dallas. Many of their descendants still live in the area today.

Veteran Henry Kyle was born in North Carolina in 1796 and died in 1881 in Dallas County. Cpl. Kyle served in the War of 1812 at Fort Nelson, Virginia, in the 5th Regiment of the VA Militia (Artillery). He married Elizabeth Pirkey in 1817 and the couple had four children: James W., Sarah Margaret, George R. and Elizabeth A.  Kyle accompanied daughters Sarah Dougherty and Elizabeth Foree and their families to Texas in 1860.

Veteran John Jackson was born in Tennessee in 1798 and died in 1875 in Dallas County. Private Jackson served in the War of 1812 in the Tennessee Militia under Captain Craig.  He married Elizabeth Brown in 1822 and the couple had eight children: Andrew, William, James, Mary Jane, Lucy, John, Thomas and Hannah.  Jackson and his family came to Texas in 1846 and settled near present-day Garland on a Peters Colony grant.

The March 6 event to mark the graves of War of McCree Cemetery’s 1812 veterans is one of the many important events that will be held at the cemetery as the preservation and revitalization of this important landmark continues.

McCree Cemetery was once situated on the hilltop of a vast prairie in a farming community 10 miles from the limits of early Dallas, southeast of the intersection of what is now Audelia Road and Estate Lane in Dallas.

The cemetery was founded in 1866 when Mahulda Bonner McCree granted roughly 1.5 acres to William McCullough and James E. Jackson for its establishment. Another one acre of land was added to the cemetery in 1896 when Jeff Hill (the founder of Egypt, also known as “Little Egypt,” an African-American community), George John and Monroe Parker purchased land from J.E. Griffin to create a beautiful burial area for Black residents. McCree Cemetery today comprises 2.6 acres of native species of prairie vegetation and its beautiful hilltop location in the middle of what is now a modern mix of residential homes and commercial properties.

Preservation and restoration work on McCree Cemetery included a 2015 inventory of grave markers, which located 158 markers and monuments on the site bearing the names of Peters Colonists, early settlers, freedmen and war veterans. For nearly 100 years, McCree Cemetery served as a burial site for the surrounding hamlets of Audelia, Rodgers, and Egypt. Listed in 2018 as a City of Dallas landmark, the property is recognized under seven of ten possible historic designation criteria, including the historical development, ethnic heritage and cultural characteristics of the city. There are two distinct sides to the cemetery, one for Anglo burials and one for African American burials.

The western side of McCree Cemetery includes the oldest known burial in the cemetery, which belongs to John Henry Jones, who died in 1862 from wounds received during the Civil War. The last burial was Margaret Elizabeth Dockins, who passed away in 1982. Family names of the Anglo settlers buried at the cemetery include Jackson, Prigmore, McCullough, Griffin, Crosby and Goforth. Many veterans are also buried in McCree Cemetery, including those that fought in the Battle of 1812, Mexican American War, Civil War, the World Wars and other conflicts. McCree’s eastern tract was one of two used by the Egypt community. Jeff Hill, the son of two of Egypt’s founders John (Jeff) and Hanna Hill, is buried here. The property once included a church, the Cemetery Chapel Methodist Episcopal Church South and later the Rogers Baptist Church (1931-1939).

Heavily vandalized in the 1950s and in subsequent years, the cemetery is now protected by a tall fence. Nearby development beginning in the 1960s marked the end of McCree Cemetery’s rural location along with the razing of the nearby Egypt community.

Preserving the Legacy of McCree Cemetery

The continued vandalism of the cemetery led concerned Lake Highlands resident Robin Moss Norcross and cemetery descendants to approach Preservation Dallas in 2013 to help. Since then, Preservation Dallas has been actively engaged in preservation work at McCree, using grant funds received from the B.B. Owen Foundation and others to support those efforts.

With the assistance of the archaeologists, historians and cultural resources experts at Versar, Preservation Dallas initiated a multi-year survey, documentation, and restoration program at the cemetery. This included historical research to learn more about McCree’s history to give names to those whose markers have disappeared over time and to secure City of Dallas Landmark designation.

In 2018, McCree Cemetery was listed as a City of Dallas historic landmark and, in 2019, documentation of the cemetery was done by drone and a landscape clean-up. In 2021, the headstone cleaning commenced.

Norcross, along with fellow board members Joan Walne and Ted Campbell, hopes to hold future events at the cemetery to celebrate its vast and diverse history.

“This is one of the most historically significant cemeteries in all of North Texas,” Norcross said. “Members of many of the founding families, Peters colonists, are buried there, as well as residents of the Little Egypt Freedmen’s community,” Norcross said. “I just think it’s important for any community to understand their past. It’s a great story. There are wonderful people that made significant contributions we enjoy today in Lake Highlands.”

In the 1800s, Benjamin Prigmore, an early settler of Dallas, explained that this small rise of land was chosen as a burial ground because it was the prettiest spot in the area. He was right then, and he is right now.

Read more, see the photo gallery or watch the video.

McCree Cemetery is a 2.6-acre site in the Lake Highlands community of Dallas, Texas and represents a significant piece of history of the area from Reconstruction and the Jim Crow period to the 1960s. 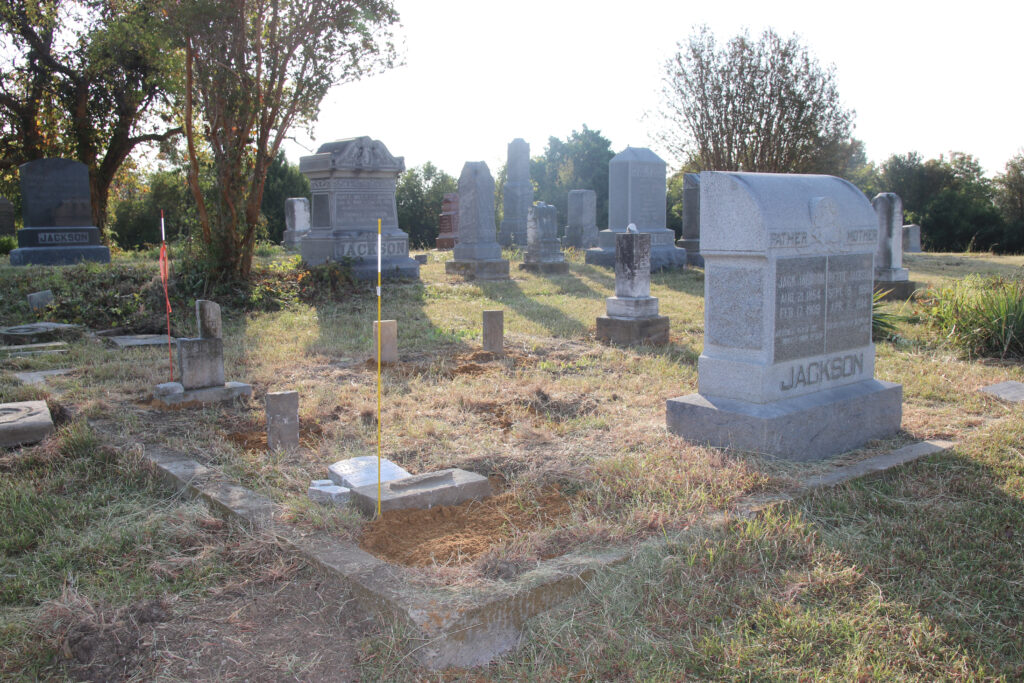 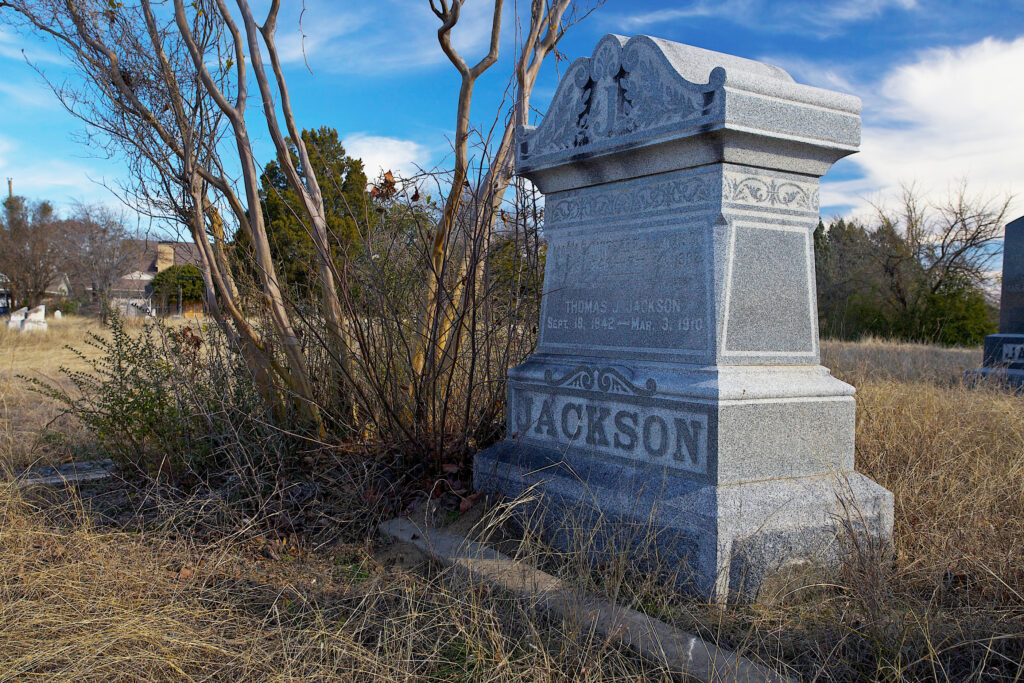 Preservation Dallas in January 2014 set out to conduct an archeological survey and historical research on McCree Cemetery.  The project forms the basis of a restoration program of McCree Cemetery in the Lake Highlands neighborhood of Dallas, Dallas County, Texas.  The 2.6-acre site primarily consists of stone grave markers surrounded by overgrown vegetation with interspersed trees across the site and marking the cemetery boundary.  The restoration program’s goal is to record, preserve, and restore the cemetery monuments and establish guidance for the continued stewardship of McCree Cemetery.